The work began about two years ago and was completed in September this year.

The idea was to create the best album we could and I think we have succeeded .

There are 13 new songs, it's heavy, it's fast, it's epic. it's everything Syron Vanes stands for.

I am sure that our fans will like the album, and that it also will attract new fans.

Album artwork is made by Javier Lonko and it is an absolutely amazing piece of art he has created.

An early review received from Seb Di Gatto sums up the album well:

it's a shame Syron Vanes never quite made it in the past, but if  "Chaos From a Distance" is anything to go by, these metallers will again be picked up by the big Magazines and Festivals and will be bringing their livewired shows to a venue near you in 2017!!

CHAOS FROM A DISTANCE IS RELEASED 27th, PRE-ORDER IT HERE. 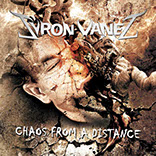 ANDERS HAHNE ON THE NEW ALBUM: "CHAOS FROM A DISTANCE".

To start writing the new album "ChaosFrom a Distance" was quite difficult because the last album "Evil Redux" was such a great album,  it’s had to be a proper take-off from that record, which was not easy.